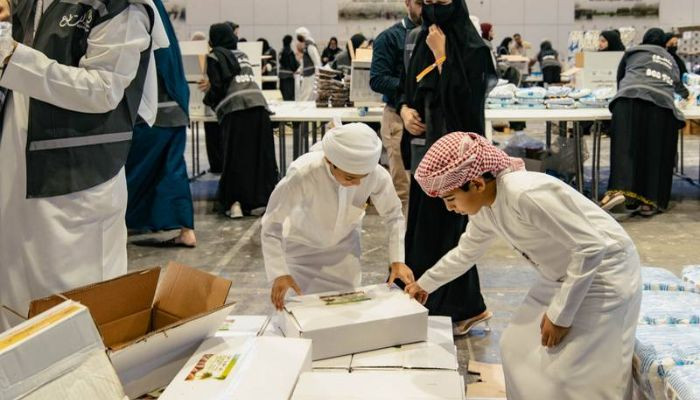 Hundreds of volunteers gathered at the Abu Dhabi National Exhibition Centre, Dubai Expo City and Expo Center in Sharjah to collect donations and pack thousands of emergency aid packages and food supplies for the flood-affected Pakistanis. The national.

The nationwide volunteer initiative “We Stand Together” brought together hundreds of emirates, including children, on Saturday to collect boxes to be sent to Pakistan.

By the end of the activity, volunteers made 30,000 boxes containing 1.2 tons of supplies.

Children who were part of the community event drew pictures and wrote uplifting messages that were added to the aid boxes to express their solidarity with the crisis-hit country and create a sense of hope.

Nearly 1,400 people have died in flood-stricken Pakistan, with at least 33 million displaced.

Nearly 500 volunteers gather at the Expo Center in Sharjah alone. The aid boxes contained food items such as tomato paste, oil and rice and essential toiletries such as sanitary towels and soap.

Led by Emirates Red Crescent Authority, Dubai Cares and Sharjah Charity Association, the initiative was in coordination with the Ministry of Foreign Affairs and International Cooperation and the Ministry of Community Development.