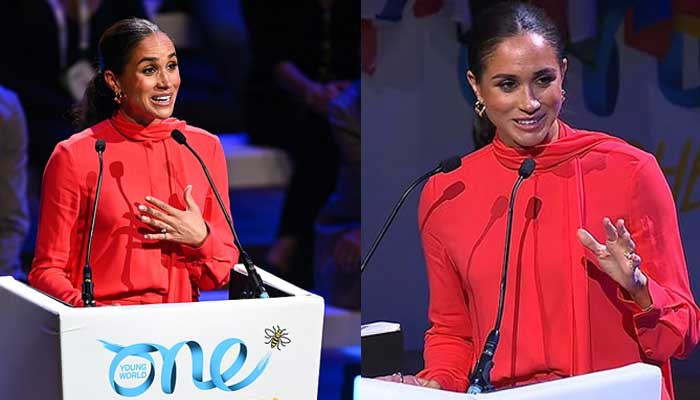 Meghan Markle spoke of perseverance when she gave a speech at the One Young World Summit at Bridgewater Hall on Monday.

Prince Harry’s wife said in her speech on gender equality in Manchester that the first year she joined One Young World in Dublin she worked with a young woman from Eritrea, adding: “She had fled her homeland, on the flight with bullets fired over her head. . I remember it so well.’

“I remember my shock, and I also remember her courage, my recognition of how much happens every day with so many turning a blind eye. And yet, despite all the setbacks, like so many others, she persevered,’ she continued.

Meghan also reflected on the importance of the impact of young people in the world, saying, “My husband has long advocated an important and necessary impact in the world, focusing much of his life’s work on youth.”

“So for both of us, witnessing the power you have in your hands and the unbridled enthusiasm and energy you have to see things come to fruition – it’s just an absolute privilege.”

She continued: ‘But One Young World saw in me what I fully wanted to see in myself, they saw in me just as I see the present and the future in you.’

“We often say here that the time is now, but I’ll double that by saying that your time is now. The important work cannot wait until tomorrow.’

Archie and Lilibet’s mother said her life had “changed significantly” in 2019, when she became a mother: “I joined you in London in 2019 and at that point my life was quite charged,” she said. “I was now married and I was now a mother. My world view had grown exponentially and I saw the world community through my child’s eyes.

‘And I would ask, ‘What is this world that he would come to adopt? And what can we do, what can I do to make it better’.

She continued, “I’m thrilled that my husband can join me this time so I can see and experience first-hand my respect for this organization and all it offers and achieves.”

Meghan shared her feelings about the One Young World, saying it had been “an integral part of my life” for so many years before meeting Prince Harry. “To meet again here, on British soil, with him by my side, feels full circle.”

Harry’s sweetheart said she had the opportunity to meet some delegates from the event before her speech. She called the meeting “incredibly inspiring” and added that “sounding themes emerged” about “representation, inclusion and access.”

Meghan said, “You are the future. I would add, you are also the present, you are the ones driving the positive and necessary change that is needed around the world right now.”