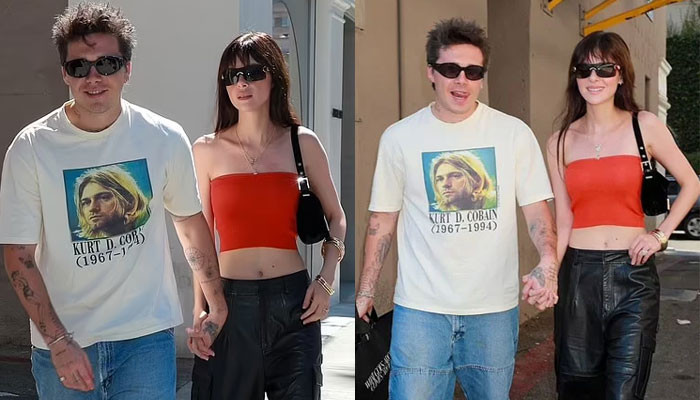 Nicola Peltz turned heads with her gorgeous looks when she was spotted with hubby Brooklyn Beckham shopping in Beverly Hills on Monday.

The billionaire heiress and eldest son of David and Victoria Beckham walked hand in hand as they explored the stores according to photos obtained by Daily mail.

The Transformers star showed off her taut tummy in a cropped red crop top and black leather pants that sat on the thighs and detached from the bottom.

Nicola left her gorgeous brown hair open with her forehead covered in her bangs while her eyes were covered in dark sunglasses.

She adorned her look with gold bangles and a locket as she flashed her beautiful smile at the camera while carrying a black bag.

Meanwhile, the budding chef looked handsome in a white t-shirt with a picture of Nirvana frontman Kurt Cobain paired with blue jeans.

Brooklyn donned dark shades and opted for white sneakers for his outing while carrying a black cap and black shopping bag.

The outing comes amid reports that Nicola and Victoria have not been at their best with each other since Brooklyn tied the knot in April this year.

According to previous reports, the animosity between the ladies started when Victoria received a gushing tribute from singer Marc Anthony during the wedding, which upset Nicola.

Later, Victoria is said to have requested a mother-son dance when Nicola and Brooklyn would come for their first dance after exchanging vows, causing the bride to leave her reception in the middle.

“Nicola stormed off in the middle of her wedding reception with… [her sister] Brittany and her mother, and cried her eyes out,” an insider told the outlet.

However, another source claimed that the rumor war started when Nicola asked Victoria to design her wedding dress, despite not planning to wear it on her big day.