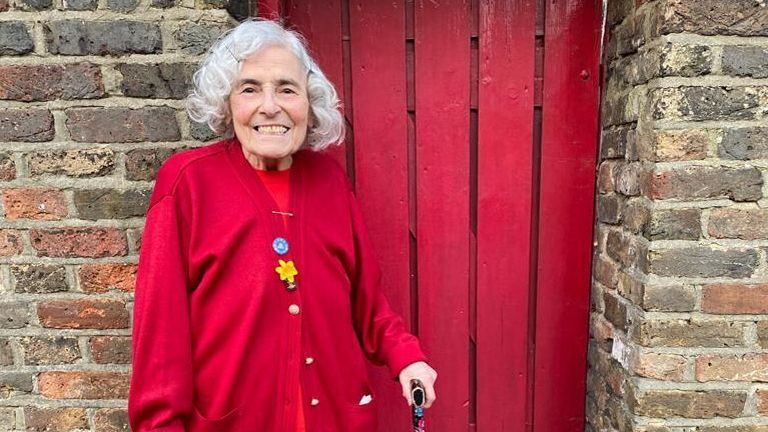 Maria Petri shuffled painfully along the sidelines and dropped into her chair. It was last spring and Petri, 83, was feeling faint, her normally booming voice diminishing to a whisper, yet she came to Borehamwood to see Arsenalthe club she had fervently supported for 72 years and that became the love of her life.

She was short in stature, old in age, and loud in the mouth. This match was just one of thousands she’d attended — from youth matches to senior matches for men and women in Highbury, the Emirates and Borehamwood, to international challenges. She attended a staggering number whenever she could, her ardent loyalty to Arsenal unwavering.

Petri was the club’s most iconic fan, famed for her booming chants that were heard so well that other fans would listen to them on WSL broadcasts. Former taxi driver Paul Chisnall, who was friends with Maria and gave her a lift to the game, recalls being impressed that she showed up despite her declining health. She just didn’t seem up to the task. Shortly after, he made the short walk to the bar to get her a cup of coffee, but was shocked when he returned: Petri was singing and begging the crowd around her to do the same.

Vic Akers, the Arsenal Women’s coach from 1987-2009, gives the same answer any Arsenal player, coach or fan gives when you mention her name. “All I can remember was this voice going through my head thinking who is this person?”

“When I finally met her, I realized that this is the lady you could hear all over the floor. You would always know that ‘Mary is there’. You could still hear her in the crowd,” Akers adds.

Maria Petri died on July 22. Last season would be her last in the stands, 64 years after her first game. Over the years, she became known for her many quirks, such as how she refused to say the name of Arsenal’s arch-rivals ‘Tottenham’, instead calling them ‘N17’. Or how she brought multiple cameras to every game, which always included a disposable camera so she could capture everything that caught her eye: her favorite players, the dugouts, cheering fans.

She was known to hand out white sheets of paper to other fans with chants she had written and created herself. For Beth Mead, a star of the Arsenal team and the top goalscorer of Euro 2022, she sang “There was a girl out England, Meado! Meado!” To star striker Vivianne Miedema, she sang: “Miedema is magic, she has two magic feet, and when she weaves her magic spell, let her beat defenders!” For women’s football it was: “If you like women’s football, clap your hands.” hands!”

Petri’s love affair with Arsenal began in 1950 when she was 11 years old and would hear the club’s name on the radio several times. She grew up in London with Greek parents who wouldn’t allow her to watch football: they would tell her that football was ‘not for girls’. It wasn’t until eight years later that she was away from home while studying to be a teacher on the South Coast that she saw her first game: Portsmouth vs. Arsenal in 1958.

Since then, she has supported Arsenal in thousands of games, including home and away. She attended days in European capitals such as Brussels, Prague and Rome, culminating in the defeat of the 2006 Champions League final for men against Barcelona in Paris, and the UEFA Women’s Cup victory at Borehamwood in 2007. She was always there, whether it was a youth competition or an annual shareholders’ meeting. (Petri also owned Arsenal stock and would repeatedly use her platform to advocate for more investment in the women’s side.)

Her life was Arsenal. She never married and has no children. Her family was the club itself, although that was not always easy. In a story for Mundial magazine, in which she referred to the misogyny she experienced at male games, she wrote: “I heard people say, ‘Oh shut up! Go back to the kitchen! Does your husband know you’re here?’ And I just chanted back to them, “You’ll never shut me up!” and everyone would laugh. So I turned it around on them.”

Petri’s relationship with the club’s players was also special. She was a regular at U23 matches and youth matches, there to support Arsenal in all its forms. Petri spoke several languages ​​– her day job was as a language teacher at a secondary school in North London — so she did her best to talk to players in their native language. By the time players made it to the first team, they would be on first name with Petri.

Jordan Nobbs, who has played for Arsenal for over ten years, recalls a time when Petri rolled her ankle outside the team bus: the players helped her on board and drove her back from the game with them so she could be treated immediately by the club. medical staff. She sang all the way back.

In the early years she sometimes drove back with Akers and his team, something that was also the case with European road days.

“If she was staying at the hotel where we were staying, we would try to take care of her,” Akers says. “Sometimes she was on our flight too, and the girls enjoyed talking to her.” There was also a time when her flight back from a preseason tour in Asia was canceled so she was invited to jump on the club charter flight with team managers.

As Petri got older, she had a support system of Arsenal fans who helped her buy match tickets and arrange her travel to matches. Marcia Milnes met Petri over a decade ago and soon became related to a personal assistant, sorting tickets, escorting her to games and getting her food at the stadium. “It would take about half an hour” [to reach her seat at a game] because everyone would come to her,” she says. “They would either just want to talk to her, or someone would say, ‘Oh, God, Mary, I met you 10 years ago.

“She always said Arsenal was her family and it made her feel special that everyone had this love for her and wanted to talk to her and hear her stories.”

Forever in our hearts .️ pic.twitter.com/spPp3s2z1Y

Just as Petri always stayed with the club when they needed her, Arsenal seemed to rally around her. A few years ago, Petri spent a few nights in the hospital and two members of the technical staff paid her a visit. During the first lockdown enforced by the coronavirus, the club sent former midfield legend Ray Parlor (339 appearances from 1992-2004) to Petri’s tiny home in north London with a present: the FA Cup. The club also arranged a special permit for its taxi driver, Paul, which allowed him to drive under the Emirates to a bay right next to an elevator, where club staff would help her to her seat.

When she died the obeisances were direct and plentiful: the club sent a tribute, followed by several players — including England defender Leah Williamson, Arsenal midfielder Jordan Nobbs and former Arsenal/England striker Ian Wright — like thousands of fans. Within hours, her name was trending on Twitter. FIFA even paid tribute, while the Arsenal club shop represented her prominently in a display. Speaking at a press conference that evening, Mikel Arteta described her as an “integral” part of the club’s support.

“The way she passed on Arsenal values ​​and the feeling of this football club was something I’ve never seen before. She was everywhere, every week and she will be missed. Amazing,” he said.

“Football is for the fans. It may be the best game in the world, but if there are no people to watch it, it will be nothing.”

Tonight, Arsenal players past and present, as well as fans, mourn the loss of a unique, much-loved member of their family. Rest in peace Mary. https://t.co/dlhpHwlL3F

Arsenal went even further: “Rarely can one say that ‘games just won’t be the same’ without a supporter, but Maria’s presence… will really leave a void on match days at Emirates Stadium, Meadow Park [Borehamwood] and away games wherever we play.”

The news of her death came as a shock even to those closest to her. When Petri’s friend Milnes received a phone call on that Friday afternoon in July, she was heartbroken. That morning, she had just been on the phone with the club to arrange her season ticket for the WSL 2022-23 season.

Petri’s funeral took place in North London on August 30. The doors of the church were red and white, while many of her closest friends wore Arsenal shirts to the service. A number of Arsenal staff were also in attendance, including Arsenal captain Kim Little – one of Petri’s favorite players – and Arsenal chieftain Vinai Venkatesham.

With their season opener featuring Manchester City postponed, Arsenal start campaign against Brighton at Borehamwood. It will be the first home game without Petri. Tributes are planned, while Petri’s face will grace the game’s official schedule.

It was a time she told others would come someday, though for one reason she prayed it would never happen. She would say: “I will be oh so upset when I die because I can’t watch Arsenal anymore.”