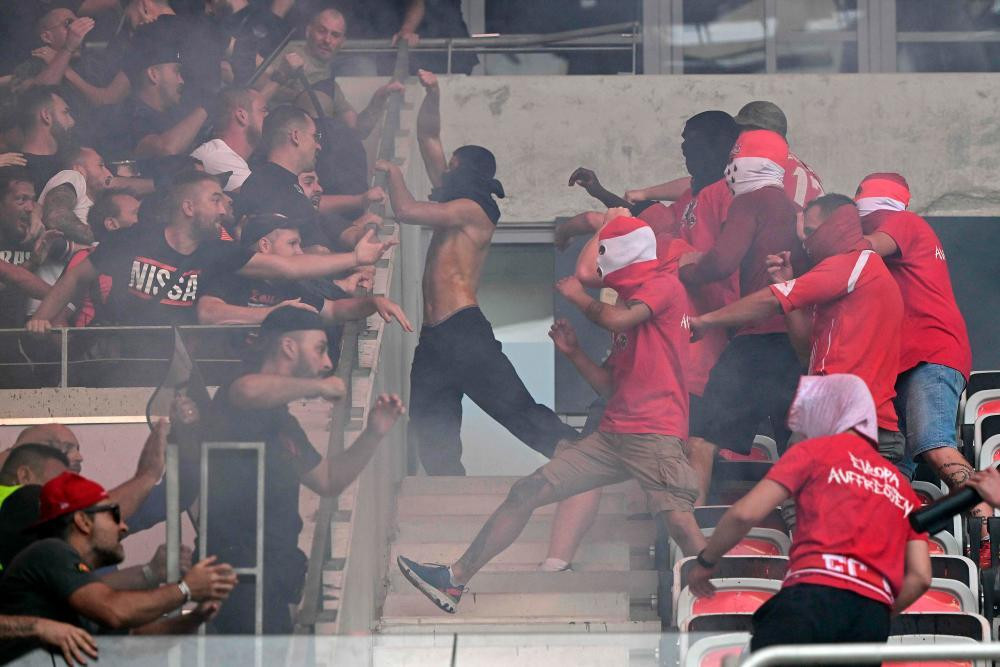 Both Nice and Cologne on Friday condemned the violence during their Europa Conference League match in southern France, which left one fan in critical condition and dozens of others injured, as UEFA opened disciplinary proceedings against both clubs.

“We condemn in the strongest possible way the horrific scenes that took place before yesterday’s game in Nice,” Cologne club president Werner Wolf said in a statement on the team’s Twitter account.

Later in the day, his colleague in Nice, Jean-Pierre Rivere, blamed some of Cologne’s 8,000 fans while acknowledging that security at the Allianz Riviera stadium had gone down.

“When you experience it live, it’s terrible. The next morning you relive it, it’s even worse,” Rivere said.

“We have reserved a room for screening,” he said. “But when we opened, they broke everything.”

He said there were “flaws everywhere”, especially in club cooperation.

An hour before the scheduled kick-off, several hundred masked fans in Cologne colors burst into the stands of Nice.

Clashes broke out in which some fans armed with chairs or iron bars were ripped from the stadium, and a total of 32 people were injured, including two police officers and a flight attendant.

Four were hospitalized, one of whom – a Parisian who was among the German supporters – was in critical condition after falling into the chaos.

UEFA said it would be investigating the behavior of their fans, but would also look into possible breaches of security and safety regulations by the home side.

Rivere complained that the design of the stadium, which is owned by the city of Nice, made it difficult to separate fans.

“The stadium is beautiful, but the design prevents the sectorization of the stands,” he said.

UEFA said Ligue 1 side Nice will also have to respond to shortcomings in the “identification of responsible persons”.

“It is not possible that they have not been identified, especially the French,” Rivere said, blaming “some Parisians” who “were not at their first incident”.

The German visitors, like Nice, will be examined for “crowd disturbance”, “throwing objects” and “setting off fireworks”.

“These hordes, these street fighters have no business in a stadium or around it,” Rivere said. “If we don’t get these people out of the stadiums, we will never solve the problem.”

Cologne would “do everything in our power to clarify what happened and confront those who chose violence with full consequence,” Wolf said.

“We owe it to our thousands of peaceful fans and to football in general.”

“We wanted to celebrate a big, peaceful football celebration,” Keller said, adding that the events had only resulted in “suffering” instead.

The violence caused a delay of nearly an hour until the start of the match.

The group D match eventually started and ended in a 1-1 draw.

In August last year, a Ligue 1 match between Nice and Marseille was canceled after a field invasion by fans, followed by a fight between supporters, players and staff from both teams.

In 2017, kicking off a Europa League match between Cologne and Arsenal were delayed by an hour after police made arrests at the Emirates Stadium as German fans occupied the home sections of the ground.