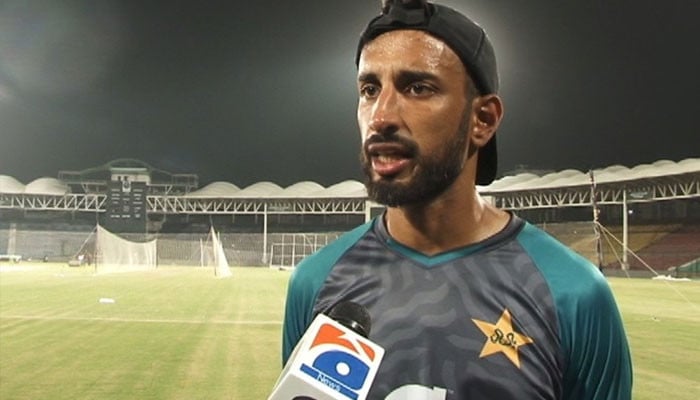 Pakistan’s best hitter Shan Masood has said he always wanted to step out of his comfort zone to test himself and try new things, given the importance of being prepared for any circumstance and position.

The cricketer was strapped in for the 15-man squad for World Cup T20 and seven-match T20I series against England from September 20 – given his excellent score in the shorter format.

In an exclusive interview with Geo-newsShan said he never thought of himself as a player limited to a certain size or position.

“A good player is someone who can adapt to any size, any position at any time,” said the 32-year-old cricketer.

Before being selected in the T20 squad, Shan was usually considered a player more suited to red ball cricket. But – with his recent performanceShan brushed aside this perception of himself.

“People are entitled to their opinion,” he said when asked why he was usually considered a red-ball player.

‘I never limited myself as a player in one format’

What’s more important is what a player thinks about himself and what he expects of himself, Masood said, adding that he has never limited himself as a one-size-fits-all player.

“I kept trying and testing myself to know how far I can go. I believe a good player is the one who is willing to adapt to any format,” said Shan, who has scored more than 1,200 runs this year in the shortest size of the game.

The batting officer added that playing multiple formats in one season for his county of Derbyshire has helped him jump from one format to another this year. He played 25 Tests for Pakistan, scoring 1,378 runs in 47 innings. He only got 5 ODIs and has yet to make his T20I debut. However, the player already has impressive stats in PSL and Vitality Blast T20.

Recently, Shan also tested himself hitting No. 4 in the T20 National Championship, indicating his readiness to play in the middle class.

“I want to take myself out of my comfort zone, you have to respect the situation and it’s important to understand that there is tough competition between batters in all three formats of the game in the country,” Shan said.

He said there’s no harm in trying and testing his potential.

Shan shared his experience playing number 4 and said he learned a lot from it because it gives the batter time to see and analyze the game and the opponents. However, he said hitting the middle class has its own challenges and benefits.

‘I want to fully enjoy playing in the national team’

Talking about how he sees it playing out in the T20I series against England, Shan said it’s a great opportunity for him and he wants to enjoy this opportunity to the fullest.

“To play for your country in any form is always a great moment. It is also important to me and I want to enjoy it without thinking too much about the results. I want to contribute to my team in the best way I can, either by contributing to the planning or by giving my best when I’m in the middle of it,” he said.

He emphasized that both teams are well aware of each other and of the conditions they face.

“If players from England have played in PSL, we’ve played with them in the provincial championships too, so we know each other well, it’s not the same that teams would struggle in away conditions as franchise cricket has players able posed to learn the conditions in different countries. and strength of different players. So I believe that both teams – England and Pakistan – know each other well,” he said, hoping for a great match between the two sides in the bilateral series.

“Consistency in the momentum will be key, it’s important to keep the momentum going until the end because it’s a long 7-game run so you have to be consistent. helped you win the series,” Shan concluded.