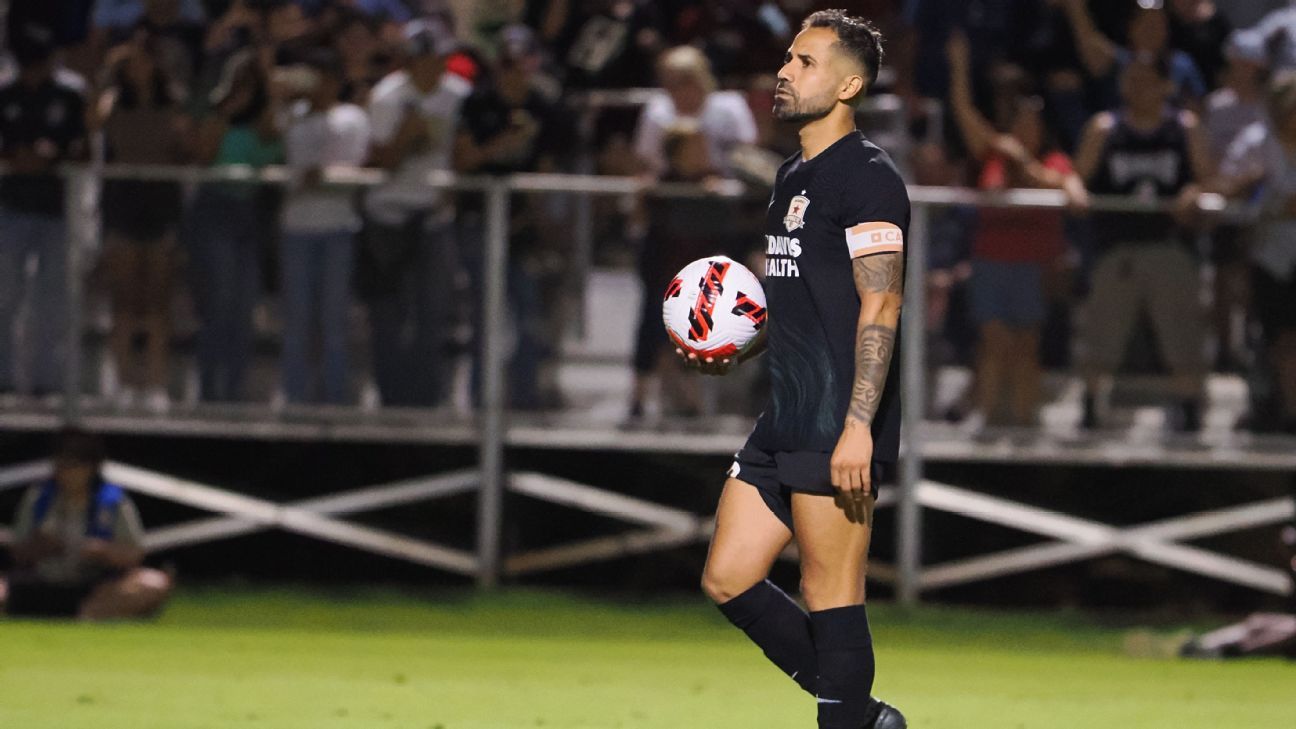 Almost stop and hang up his boots nine years ago, Sacramento Republic captain Rodrigo Lopez is now one win away from an unlikely feat in American football.

As part of the USL Championship in the second division, the Republic aims to win the US Open Cup – the oldest soccer tournament in the country – when they clash with Major League Soccer’s Orlando City SC on Wednesday (stream on ESPN+, 8pm ET).

“I still can’t believe it sometimes,” Lopez told ESPN. “Not that I’m saying we don’t deserve it. We certainly deserve it.

“I’m just saying that a USL Championship team or a lower division team is in the final of a cup, that’s definitely very rare.”

The knockout competition dates back more than 100 years when the organized versions of the sport were still in development. The game is now much more sophisticated in modern times and with the introduction of MLS in 1996 it has become rare to see teams from outside the top division in the finals.

In recent months, Lopez and Sacramento have stunned the American football world, taking bold victories on MLS sides Earthquakes in San Jose, LA Galaxy and Sporting Kansas City to reach the final. In the semi-final against Sporting KC, Lopez acted as the hero of the evening, scoring the winning penalty in a shootout that followed a tense 0-0 draw in regular time.

Sacramento – the first non-MLS finalists since 2008 – would also become the first lower division team to win the trophy in the 21st century.

‘From salary to salary’

It’s a fairytale run and one that might not have happened if Lopez had finished his time with the sport – which was a possibility almost a decade ago.

Born in Guadalajara, Mexico, Lopez moved to the United States at a young age but eventually returned home via the famous Liga MX academy in Chivas. In 2005, Lopez’s career took off with a professional debut with the Guadalajara club’s MLS affiliate, the defunct Chivas USA, and a call up to the U18 squad for the US National Youth Team.

Consistent appearances then became hard to earn for the midfielder at Chivas USA, leading him to a handful of different leagues and teams in a short space of time. In 2013, he found himself questioning his future during a stint with Los Angeles Blues in the third division (now Orange County SC) in the former USL Pro League.

“I lived paycheck to paycheck… I slept in a closet,” said the 35-year-old. “That just tells you how much love I had for the game.”

When a season ended, Lopez worked in construction to help put food on the table and care for his growing family, which included his newborn son Roman. The Sacramento Republic, who would begin their first-ever season in the USL in 2014, reached out to him during this time to join them. He did not want to stop with the sport, but also had his doubts about returning. The support they had received reciprocated the people close to him and helped make a decision to sign with the Republic.

“When my family spoke, they said it was my chance to really make something of my career if I really wanted to. They saw how hard I was building and how miserable I would come home and miss the game.” said Lopez.

Taking advantage of the opportunity presented to him, he balanced a restless off-season schedule, hitting the gym at 5 a.m., building all day, and then going for a run in the evening.

“I was more than ready, I had never felt so good in my life,” he said.

As a key figure, Lopez supported a Sacramento squad that won a USL Pro title in their debut season in 2014. In the championship game, he would take honors as the match MVP. It’s not surprising that he got attention back home in Mexico. In 2016, he made his debut with Celaya in the second division of the country, which later paved the way for a dream move to top Liga MX via Toluca and Veracruz.

In his thirties he returned to Sacramento in 2020 and after a brief stay with Rio Grande Valley FC last year, he is now back with his third stint at the club – which could prove to be the most meaningful yet as a national title will be lifted next week.

“It would be huge,” Lopez said of potentially winning the US Open Cup. “Sacramento, we are known for being indomitable and winning a championship reflects not just on us, but on the entire city.”

‘If you’re MLS, you should watch Sacramento’

On their way to the US Open Cup finals, the football community of Sacramento and the Republic, like Lopez, have had their own share of ups and downs.

Emerging from a burgeoning fan base, support from local leaders, and plans for a new stadium through wealthy billionaire investor Ron Burkle, Sacramento was announced as another expansion for MLS in 2019, with a projected transition to the league in 2022 — delays due to COVID-19, the project eventually pushed forward a year to 2023.

Then, in early 2021, the city and team had the rug completely removed from under them as Burkle deteriorated, put the team jump to MLS indefinitely. Other cities have since joined the race to capture the next expansion spot, including Las Vegas, by MLS Commissioner Don Garber. called the “frontrunner” last Dec.

Lopez doesn’t shy away from that thorny subject, especially now that Sacramento is proving that they can not only keep up with the MLS teams, but beat them.

Still, Lopez was quick to comment that he is completely satisfied with playing in the USL Championship with Sacramento. When discussing the importance of the organization to him, there was a genuine sense of appreciation from the player picked up by the team when he was unsure about his future nearly 10 years ago.

“Whether I play [with Sacramento] in the USL Championship, MLS or whatever it is, I’m happy.”

He plans to extend that joy further to supporters, who have not lost faith in the Republic during the paused move to MLS. In 2022 they still have some of the very best average attendance in the USL Championship, and they continue to grow the passionate fan base that has grown louder and more elated with each passing US Open Cup game.

If you ask Lopez, that bond between the club, supporters and players like him has only grown stronger. Getting a spot in next week’s finals won’t hurt either when it comes to building enthusiasm and buzz.

“Right now, the vibe and energy of the city and the fans is bigger than ever. We’re embracing it, we’re taking it all in, we’re ready to make them proud,” Lopez said.